All of our products are Clean Energy Council (CEC) certified. The CEC provides guides and information for consumers to help in their decision to purchase solar and battery storage systems. It represents and works with Australia's leading renewable energy and energy storage businesses, as well as rooftop solar installers, to further the development of clean energy in Australia.

Photovoltaic (PV) devices generate electricity directly from sunlight via an electronic process that occurs naturally in certain types of material, called semiconductors. Electrons in these materials are freed by solar energy and can be induced to travel through an electrical circuit, powering electrical devices or sending electricity to the grid.

PV devices can be used to power anything from small electronics such as calculators and road signs up to homes and large commercial businesses.

How does PV technology work?

Photons strike and ionize semiconductor material on the solar panel, causing outer electrons to break free of their atomic bonds.

Due to the semiconductor structure, the electrons are forced in one direction creating a flow of electrical current.

Solar cells are not 100% efficient in crystalline silicon solar cells, in part because only certain light within the spectrum can be absorbed. Some of the light spectrum is reflected, some is too weak to create electricity (infrared) and some (ultraviolet) creates heat energy instead of electricity.

To make this type of cell, wafers of high-purity silicon are “doped” with various impurities and fused together. The resulting structure creates a pathway for electrical current within and between the solar cells. 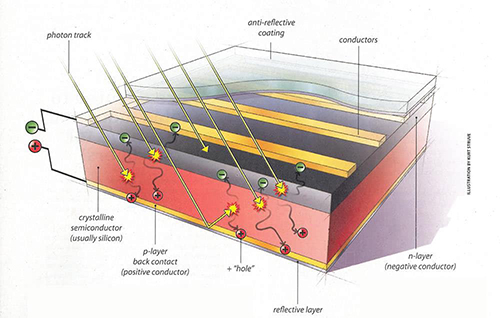 When the sun shines on the solar panels, DC electricity is generated. The DC electricity is fed into an inverter which changes the DC power output of the solar array to AC power compatible with the regional power grid regulations at the installation site. The system allows for any on-site loads to be powered by a combination of power generated by the PV system and power drawn from the mains power grid. Excess power generated by the PV system will be exported to the power grid.

The inverter deactivates at night and automatically starts operating in the morning when sunlight is sufficient. The inverter is the operations centre of your Solar Power System and as such, useful system information can be obtained from the inverter's display.

Solar batteries work by storing energy produced by your solar panels for later use. In some cases, solar batteries have their own inverter and offer integrated energy conversion. The higher your battery's capacity, the more solar energy it can store.